One of my assignments earlier this week was to shoot a girls hockey game at a local college rink. I had not been back to this place for many years and things had changed for the better. The entrance had changed and the lighting was much better than I remember. Now, keep in mind that the last time I was in this place was maybe 15 years ago and I was shooting color film pushed. I was a regular at this place in the 80's and 90's and was there probably three times a week. I would normally shoot Tri-X pushed to 1600 and later color Fuji 800 pushed to 1600. We did shoot TMax 3200 from time to time but the grain was pretty bad. The exposure was 1/500s @ 2.8. This day was different. I was in for a pleasant surprise. The rink was bright! I decided to use my Canon 5D Mk3 for sports and was wondering what it would be like for hockey. This camera is not really known for being a sports camera. So I put the Canon 70-200 f2.8L ll on the camera and figured my exposure in manual mode at 1/1000s @ f4 at ISO 3200. The results are really pretty good. I was surprised at the auto focus. It was not as good as I thought it would be but then again I was shooting through the glass which was amazingly clear. So the auto focus was only really working well where I expected it to. At obtuse angles to the glass it had some issues. Overall I was pretty happy with the results. The camera only shoots at 5 frames a second (only) that's what my film camera did so I should not be upset. Well my 7D does 7 frames a second. Here are some of the images from the game. 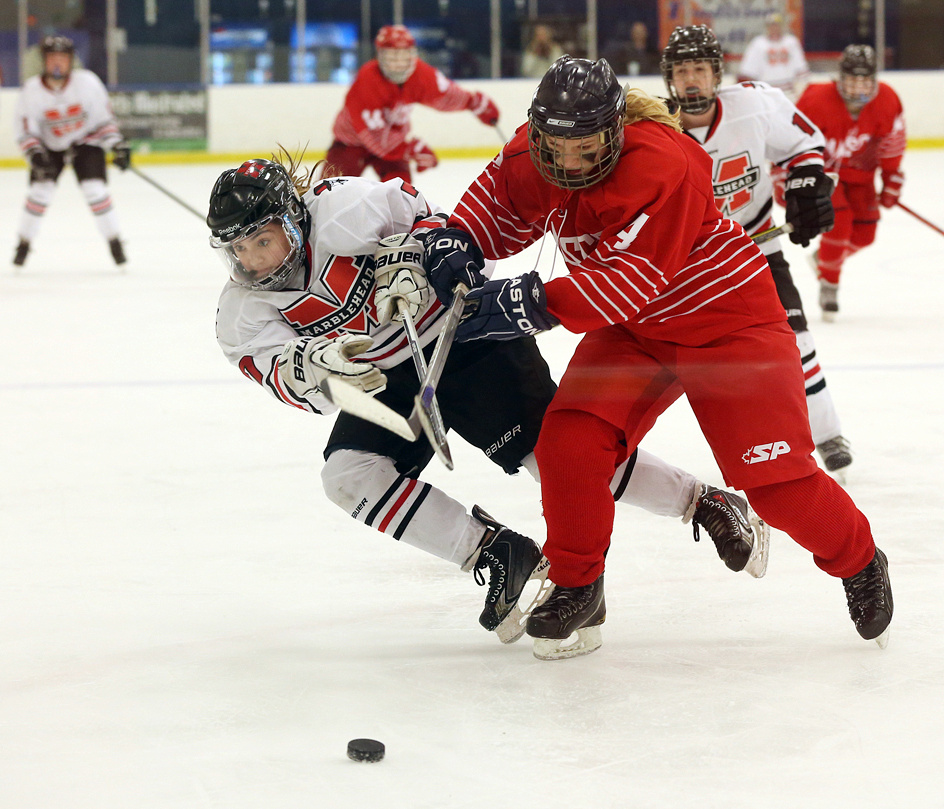 Marblehead vs Masco girls hockeyMarblehead's Sydney Cresta of Swampscott is knocked off the puck by Masco's Lily Dow of Amesbury during Masco's 6-2 victory Monday night Jan. 19. at Salem State. This play resulted in a penalty against Masco near the end of the first period.

For action coming right at you the camera performed flawlessly. The glass was clear and I have a whole series of images that are sharp of this action.

Shooting girls hockey is a little different than shooting the boys or men. The game is slower (getting faster every year) and there is not as much action. The best place to stand to shoot through the glass is in the corner where you can get one team coming at you and a clear shot of the goal. Action with the girls happens around the net and along the boards a lot so you have to be ready for this. 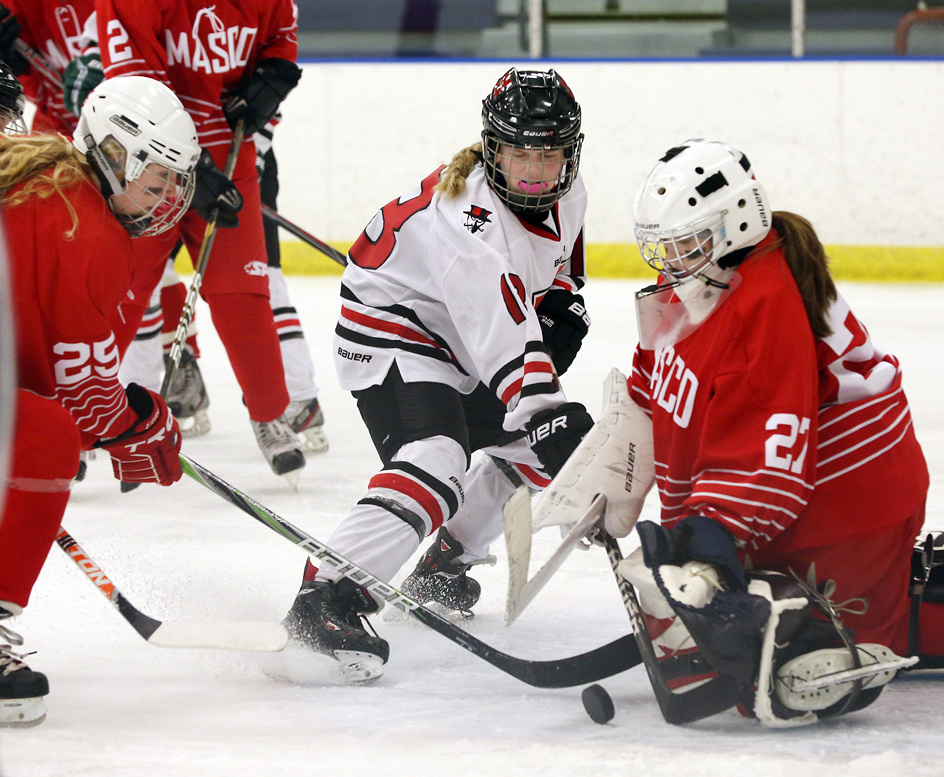 Here the camera was focused on the player in the middle so the goalie is a little out of focus. If the focus had hit the goalie instead it may have been enough to include the player in the middle. With the 7D the smaller sensor may have been enough to make the goalie sharper. The amazing thing to me is that with the 5D mk3 the results were pretty darn good. The 7D would have had a little more noise at 3200 but it would still be negligible. The other issue with the 7D is the crop factor may have given me to much reach. Usually I shoot from the stands for playoff games and the 7D is way better for that.