Last Friday I put myself on the schedule to photograph the phenomena known as Bernie mania. Here in Massachusetts it is gaining steam but honestly I think Hillary has it wrapped up. But, since I'm a political animal of sorts I wanted to see what kind of folks showed up for this event. It was interesting standing there watching who showed up. Old left wing liberals 60-80+ (throwbacks from the sixties) came in fairly early, on time for the most part. Then later on the young folks seeking better economic equality came in. It was an interesting mix. Great folks nun the less. As a documentary photographer I was disappointed in the photographic opportunities. There just wasn't much to shoot. There was a band playing and they turned the lights mostly off so things were kind of dicey for available light shots. I brought along the Sony Nex-7 and the Leica 35 Summicron looking for some interesting candid shots but I was not real happy with what I got. I will post some later. The shot below I like. It's of a woman checking her phone under the Bernie banner. This shot was made with the Canon 5D mk3 and the 24-70 f4 L. The ISO was an amazing 10,000, shot at 1/160s at 4.5 with a focal length of 33mm. 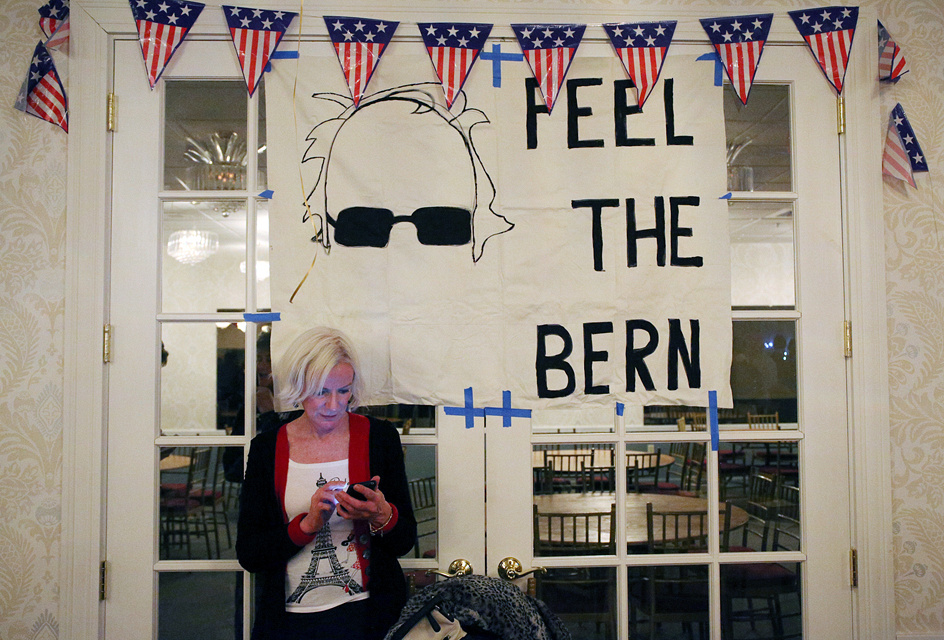 Feeling the BernDee Cuffe of Marlbehead checks her phone under a &quot;Feel the Bern&quot; sign at a Bernie Sanders event Friday night Jan. 15, 2015 at the ICC hall in Beverly.