My job these days brings me to various high schools around the area for tournament games for different sports. This week I saw boys and girls soccer, girls volleyball, girls field hockey and of course football. Wow what a week of some great sports. I am posting my favorite photo from this week it was not a tough choice but there were probably ten or so I really liked. This one stood out as you will see. The biggest problem with these tournament games is that the parking is usually horrendous. This volleyball match was no different. I drove around the school several times looking and finally parked in the back and walked through the school to the gym. This gym was mobbed! I usually find a place at the back and check the light and my camera settings which were not that big a deal since I had been there many times before. But I must tell you I don't like shooting volleyball that much. For some reason my timing is off for the first few minutes. I have to keep checking the preview to see if I got something or if it's sharp. As usual I kept checking to see if my Canon 7Dmk2 was focusing the 70-200 f2.8 L IS through the net. Sometimes yes sometimes no. I satisfied myself that I had some decent images but without my reading glasses I still was not sure if I had anything. So in between games I climbed into the stands with the mob and tried for something different which was still not easy but I did get one image I liked.

So back to the image at hand. This one girl always made a face as she went up to block or spike the ball so naturally I was looking for something good of her. In this shot she goes up for a block and it looks like she will be successful but in the two frames after this one the ball goes right between her hands. Either way her expression makes the shot. Masconomet put up a great fight coming back from two games down to tie it up but lost in the fifth tie breaker game. 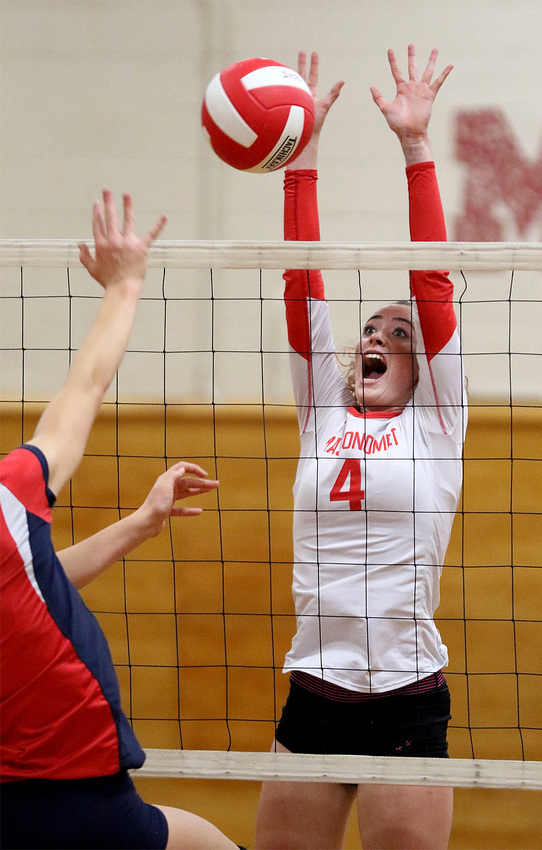