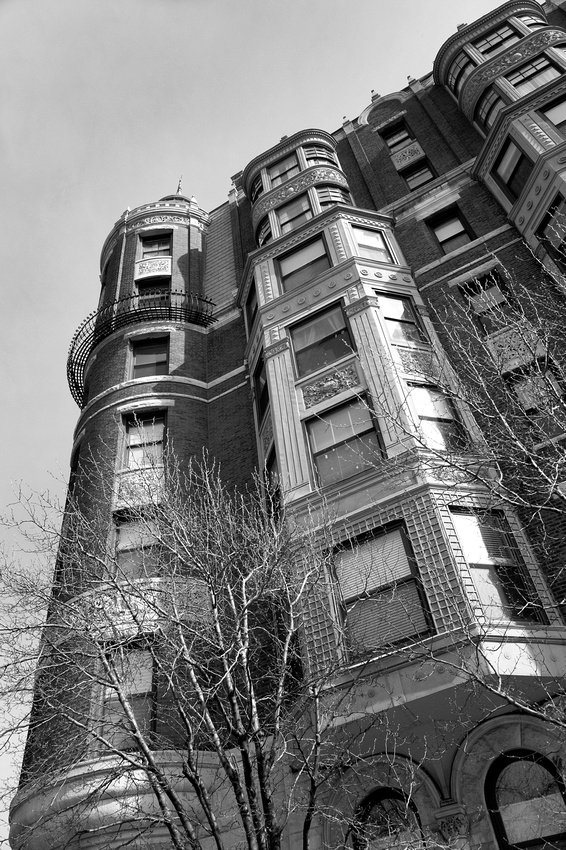 While I was receiving a ride home from the hospital with a friend (after giving the vampires some blood) I decided that the M9 needed a workout. So just before we got onto Storrow Dr. I hung out the window a bit and grabbed this shot. The camera was locked on infinity (my lens lets me do that, no drift). Like they say f8 and be there. So I guess this would be auto focus right. Not the most interesting thing I've shot but the building is just plain cool looking, for an apartment building. A quick grab shot out the window of a cool building. I opened the DNG image in Photoshop and then adjusted the color and converted to B&W then added contrast and lightened it a bit. I will do it again at home in Lightroom and add a vignette.

This image is crazy sharp! The lens is really old. It was made in 1964 in Germany, is black, and has red feet numbers. The s/n starts with 206xxxx so it's 50 years old and fairly rare. I love it. I use a viewfinder with it since for some reason the brightlines for 28 don't come up. I seem to be having an issue with that as my 90 Tele Elmarit does not pull up the 90 lines either. So it may be a trip back to Leica for the M9 to see what is going on.

Zone focusing with these wides used to be standard practice. For instance this shot at f8 gave me from 12 ft. to infinity in focus. That really is like having an auto focus camera. Just as an example I could have made this shot at f2,8 and 25ft to infinity would have been sharp. I need to do more experimentation with this camera. Street shooting in Boston this spring would be a cool thing to do.