Last night I was at a play rehearsal shooting some images for the paper. The stage light was great so the images from the rehearsal were lit really well. But those images have a certain look to them and getting something different requires some looking around outside of the stage. I was lucky to find a woman dressed in costume studying, what I thought were her lines. Come to find out she was studying someone else's lines because that person could not attend the rehearsal. She was worried she would get her lines mixed up with her own. Now, the lighting outside the stage is non existent people use flashlights to walk around. This woman was using her cell phone to light up the book she was reading.

The Canon 5D Mk3 is really incredible at low light. I shot this with the Canon 24-70 f2.8 L (not the latest version) lens which is pretty heavy. As a matter of fact the whole rig is a beast since I use the battery grip on the camera. This is one of the reasons I have been playing around with the Leica M9 and the Sony Nex-7. If I was able to use my rare version 1, black paint Leica 50mm Summilux f1.4 (currently in the Tamarkin Spring Auction) I would not have used this rig at all. But I digress. I was able to shoot this image in almost total darkness at ISO 6400 1/30s @2.8. Of course being the photojournalist I am I cheated and used a chair to steady myself. The image is tack sharp. I only wish I could have moved to a better angle to eliminate the fire extinguisher on the wall. I did burn it in a bit to make it less obvious. Moving to the right gave me a very ugly partially covered window and moving to the left gave me people and a door way. So I chose the best option I could. 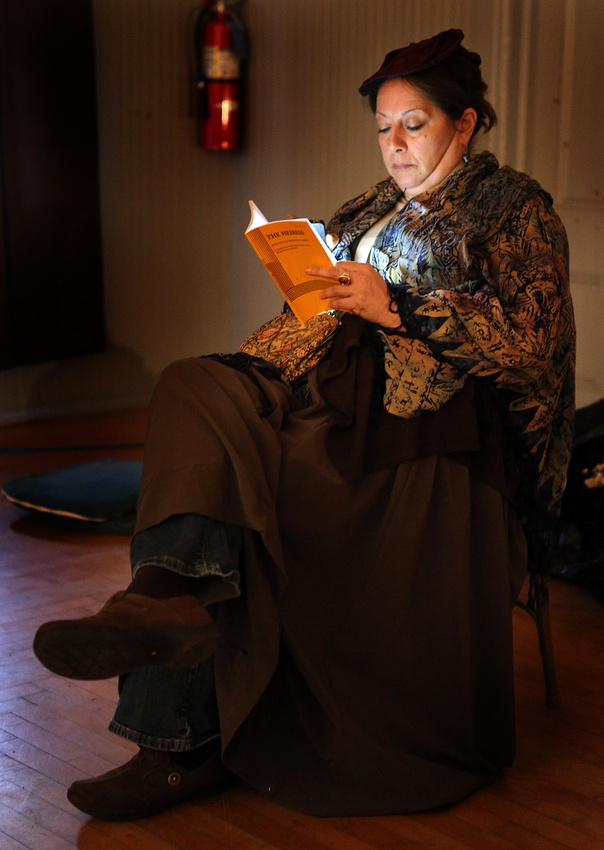 Canon 5D Mk3 w/24-70 LEileen Fitzgerald studies Mary Rudolph-Black's lines by the light of her cell phone during the Theater in the Pines rehearsal of "The Heiress" Tuesday, May 13, 2014 at Sprian Hall in Rockport. Black was not able to attend the rehearsal because of a family emergency so Fitzgerald had to fill in for her. Fitzgerald stated she was hoping not to get her lines mixed up with Blacks.