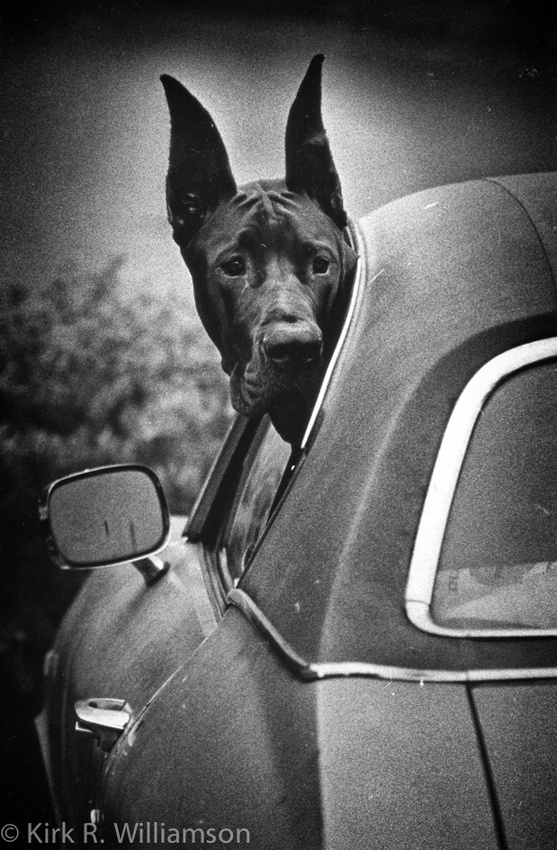 As a photojournalist I am always on the look out for images that portray everyday life. Most of the time we do this by just driving around looking for interesting things to shoot or by going someplace and waiting for things to develop. On this day I was over in the Hamilton / Wenham area of the Northshore of Boston looking for something interesting. I had stopped at convenience store for a can of Pepsi and noticed this rather large dog sitting in the back seat of this car with his head sticking out the window. So I grabbed the camera and made a few shots but as I was putting the camera away the owner jumped into the car and sped off. All I could do was follow to try and get the dogs name as well as the owner. Luckily the owner pulled into her driveway just a few hundred yards down the road. As I pulled in the dog was very interested in who I was but seemed pretty tame. The owner was no where to be found. Well the background looked very good compared to the previous shot I had taken so I made some more of the dog looking at traffic. This is one of those shots. As I was taking this image the owner finally came out and wanted to know what I was doing. When I explained I was from the paper she was very excited to see her Great Dane "Nemo" make it in the papers. This shot ran above the fold on A1 3 cols across. We got so many calls and notes from folks saying how much they enjoyed it. For me it was just another day as a photojournalist.

This image was taken on Kodak Tri-X film at ASA 400 and developed in a curious mix of D-76 and D-76 replenisher known to us as skunk piss. It processed the film very quickly but enhanced the grain as you can see.